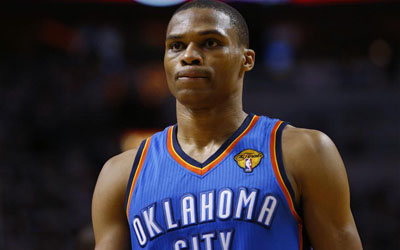 Jordan Brand, a division of NIKE, Inc., have quickly bounced back from Dwyane Wade’s departure to Li-ning by announcing the signature of Oklahoma City guard Russell Westbrook to a multi-year contract.

“We are very excited to welcome Russell to the Jordan family,” said Michael Jordan. “Russell’s style, both on and off the court, combined with his love and dedication to the game make him a perfect fit for the Jordan Brand.  We love the drive and passion for basketball that Russell brings.”

Westbrook (6-4, 187) was named to the 2011-12 All-NBA Second Team this past season after helping the Thunder reach their first NBA Finals appearance since moving to Oklahoma City. The dynamic point guard averaged 23.6 points per contest (fifth in the NBA) to go along with 5.5 assists and 4.6 rebounds during the 2011-12 regular season. The Los Angeles native scored 21 points and pulled in five rebounds in his second consecutive NBA All-Star appearance.

Westbrook followed up a very successful NBA season by playing his way onto the USA Men’s National Basketball team for the London 2012 Olympic Games. Playing in a reserve role for Team USA, Westbrook average 8.5 points, 1.6 assists and 1.6 rebounds while appearing in all 8 Olympic contests. His games were highlighted by a 21-point performance in a record-setting Team USA win when the Americans scored an Olympic record 156 points in a 156-73 win over Nigeria.

Westbrook joined the NBA and the Thunder after two seasons at UCLA where he helped lead the Bruins team to back-to-back NCAA Final Four appearances. He was named PAC-10 Defensive Player of the Year while logging 1,318 minutes played, the most by a Bruin since 1979.