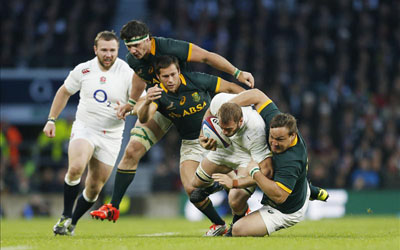 Rugby World Cup to Generate £1 Billion According to Study

An economic impact study has revealed that the Rugby World Cup 2015 in England is set to deliver nearly £1 billion of additive value into the UK economy.

The study, viagra which was undertaken by EY on behalf of the organising committee for Rugby World Cup 2015, sale England Rugby 2015, looked at the different ways in which a Rugby World Cup can benefit the host nation.

It estimates that the tournament will generate a total output of around £2.2 billion, which is in line with a previous economic study undertaken by Deloitte in 2008. The EY report predicts that this will translate into a contribution of £982 million to national GDP.

The report states that Rugby World Cup 2015 is expected to attract more international visitors than any previous Rugby World Cup, with an estimate of up to 466,000 visits.

Through spend on items including travel and accommodation, visitors are expected to contribute up to £869 million in direct expenditure.

Chief Executive of England Rugby 2015, Debbie Jevans, said: “Rugby World Cup 2015 is set to create a wide range of economic opportunities across many different sectors. Whether through investment in infrastructure, supporting jobs or generating revenue in fanzones, the economic benefits will be shared around our 11 host cities and beyond.

“With Rugby World Cup 2015 expected to attract more visitors than any previous Rugby World Cup, the tournament is on track to deliver a strong economic legacy.”

The author of the report, Peter Arnold, a Director from EY, added: “Our forecasts are based on a whole range of direct, indirect and induced benefits of Rugby World Cup 2015, from the investment that will be made in infrastructure to the ticket and tax revenues that will be generated.

“The tournament creates economic activity and employment throughout the supply chain, which has the potential to bolster the growth of the host cities as well as the UK overall.”

Rugby World Cup Limited Chairman Bernard Lapasset said: “Rugby World Cup is one of the world’s biggest and most popular global sporting events that attracts sports and major event fans from around the world for a six-week celebration of Rugby and the host nation.”

“The findings of the EY report outline the enormous economic, sporting and social benefits of Rugby World Cup, reaffirming its low-risk, high-return attractiveness to future host unions and governments and just why the tournament increasingly is great for Rugby and great for the host nation.”

“We are looking forward to a very special and record-breaking England 2015 tournament on and off the field that will provide a strong profile and financial platform to reach out, attract and inspire new players and fans around the world.”

Minister for Sport, Helen Grant, said: “Rugby World Cup 2015 will be a fantastic opportunity to showcase the very best of what this country has to offer to an international audience.

“Hosting the tournament next year will further cement the UK’s reputation in hosting major sporting events, create additional jobs and I’m extremely encouraged by the £1 billion contribution the competition will make to the economy.”