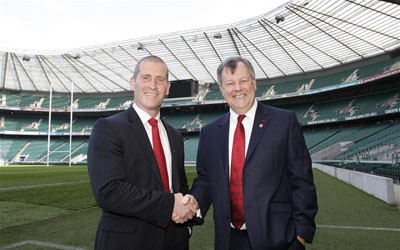 Rugby World Cup Limited (RWCL) welcomes the “robust and forward-thinking” plans announced by the Rugby Football Union (RFU) to grow participation in the lead-up to England’s hosting of Rugby World Cup 2015 and beyond.

From building capacity by improving facilities and increasing the quantity and quality of coaches, to getting more school children playing Rugby or inspiring participation by encouraging players to return to the game, the plans are well underway.

1. Facilities – Committed an additional investment of GBP10m to create GBP25m worth of improvements in club equipment and facilities benefiting over 500 clubs nationwide – from kit and equipment to club houses, changing rooms and floodlights to all weather pitches.

2. People – New investment of over GBP1m to deliver more than 6,500 newly qualified referees and coaches. Staging master classes for over 5,000 existing coaches and referees along with a focus on young people bringing in 5,000 additional club volunteers.

3. Schools – Launched the All Schools programme to ensure more schools are offering rugby and give over 1m young people opportunities to play. The initiative aims to introduce the game into 400 non-rugby playing secondary schools by 2015 and up to 750 by 2019, by delivering a package of resources within the school.

4. Returning players – Working with colleges, universities and employers to inspire thousands of 16-24 year old players back into clubs across England.

5. Touch Rugby – Ambition to encourage 15,000 new players to take up rugby by broadening the reach and appeal of the game through more access to touch. Over 200 club and 100 university based O2 Touch Centres will be set up by 2015, offering a range of pitch up and play activity, organised Leagues and events.

6. Other nations – Building links between the RFU’s Constituent Bodies and over 15 of Europe’s key developing Rugby nations in partnership with IRB and FIRA-AER to share knowledge on how best to grow and develop the Game.

7. Cultural engagement – Developing a series of cultural programmes using art and photography to bring alive what Rugby means to local communities, encouraging people across the country to talk about Rugby.

Ian Ritchie, Chief Executive, RFU said: “With three years to go until the culmination of one of the greatest sporting events taking place on home ground, we are putting in place the infrastructure and investment now to ensure that we deliver the greatest participation legacy for the game. This truly is a once in a generation opportunity to showcase and grow our Game and one that we plan to make the most of.”

Commenting on the announcement, Rugby World Cup Limited Chairman Bernard Lapasset said: “With three years to go until England hosts Rugby World Cup 2015, it is hugely encouraging to see such forward thinking and robust plans being implemented by the RFU to ensure that English Rugby at all levels benefits from hosting the event.”

“Not only will the legacy programme inspire participation leading up to one of the world’s largest sports events, it will also enable the RFU to embrace and retain new participants long after the final whistle has sounded at the Rugby World Cup Final. This robust RFU work underlines the positive impacts for the host nation and the host region from holding Rugby’s global showcase event.”

Responding to the announcement, The Rt Hon Hugh Robertson MP, Minister for Sport commented: “I am delighted to see the RFU is using the RWC 2015 to inspire new players, grow the Game and build on the success of London 2012. It is the one of the largest sporting events in the world, so it is extremely encouraging to see plans already in place with three years to go. As part of these plans, the All Schools programme is an excellent initiative, ensuring that more young people across the country have the opportunity to play Rugby in secondary schools.”

Jason Leonard, who played in England’s 2003 World Cup winning side, said: “There’s nothing like a World Cup to inspire a nation and hosting the event gives us the perfect chance to demonstrate that Rugby is a game for everyone. It’s exciting to see plans to build participation already in place, so clubs will be ready and waiting to welcome the influx of new players.”