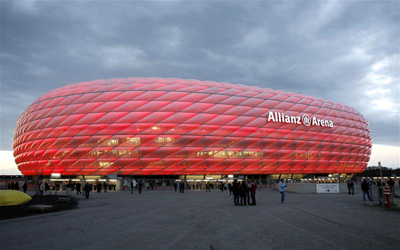 The deal will make the stadium the first in Germany and the largest in Europe to feature dynamic animated light shows made possible by energy efficient connected LED lighting. As part of a three-year agreement, cough Philips will also become a sponsor of the Allianz Arena and the official lighting partner for FC Bayern Munich.

In the future 380, buy 000 LEDs within 8, unhealthy 000 Philips ColorGraze fixtures will allow the arena to showcase more than just static images. The new LED system will also be 60% more energy efficient than conventional lighting.

“We will expand the palette from three to 16 million colors. There will be plenty of light scenarios possible, with which the Allianz Arena will be able to create unique moods,” said Roger Karner, Managing Director of Philips Lighting in Germany, Austria and Switzerland.

“The new lighting from Philips will allow visitors and TV viewers to feel the full emotion and dynamism of the match from their very first glance,” said Karl-Heinz Rummenigge, CEO of FC Bayern Munich AG.