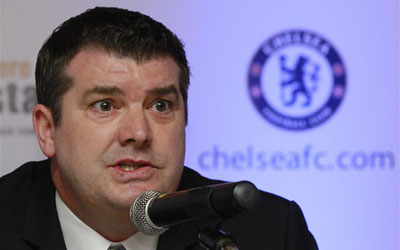 Premier League leaders Chelsea have announced that chief executive Ron Gourlay will step down from his position after 10 years at the helm.

Gourlay is leaving to pursue “new business opportunities”, and Chelsea chairman Bruce Buck and director Marina Granovskaia will cover his role until a new CEO is appointed.

Gourlay previously worked at Manchester United and sportswear manufacturer Umbro and has spent the last five years as Chelsea’s CEO.

A Chelsea statement read: “Chelsea Football Club announces that Ron Gourlay, after 10 successful years at the club including five as chief executive, is leaving Chelsea in order to pursue new business opportunities.

“The club, and in particular the owner and directors, wish to thank Ron for his many years of service to Chelsea and support his desire to seek new challenges. Ron’s efforts have helped the club to achieve its position as one of the leading football clubs in the world.

Gourlay added: “It has been a privilege to have played a role in the club’s considerable achievements both on and off the pitch over the last 10 years, but I feel the time is right to move on to other challenges.

“I would like to thank Mr Abramovich, the directors, the manager and players and all the staff for their support during my time at the club, and wish them much continued success in the future.”