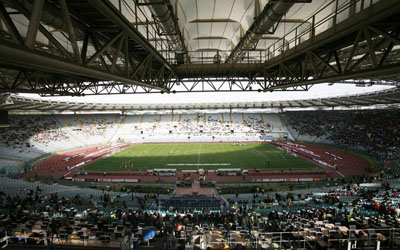 Serie A’s Roma are close to confirming plans for a new stadium, which will see them leave their current Stadio Olimpico home.

by confirming their move to a new purpose-built arena.

“I would’ve used the Colosseum, but they told me it was being used,” Pallotta told Il Sole 24 ore.

“All joking aside, we are nearly ready. We have already had numerous meetings with the Mayor of Rome and the council.

“We examined 100 potential sites, chose 12 and finally with advisors Cushman & Wakefield we got it down to a short-list of three areas. Now we are down to the final choice.

“The stadium, which will seat 60,000, includes shops and restaurants, has been planned by world famous architect Dan Meis and must be ready for the 2016 European Championships.”