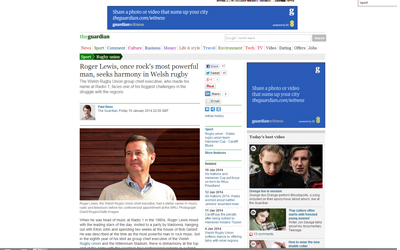 When he was head of music at Radio 1 in the 1980s, Roger Lewis mixed with the leading stars of the day, invited to a party by Madonna, hanging out with Elton John and spending two weeks at the house of Bob Geldof. He was described at the time as the most powerful man in rock music, but in the eighth year of his stint as group chief executive of the Welsh Rugby Union and the Millennium Stadium, there is disharmony at the top end of the game with the country’s four professional regions in a stand-off with the governing body.

The Cardiff Blues chairman, Peter Thomas, this week said that the regions had no confidence in Lewis. He stopped short of invoking one of Geldof’s songs for the Boomtown Rats, Go Man Go, which contains the words “these are troubled times”, but he claimed that the group chief executive wanted to destroy the four and then take complete control of regional rugby. The two sides are expected to resume negotiations next week on a binding participation agreement, and while Thomas’s remarks suggest personal differences are the biggest single impediment to a resolution, a deep philosophical divide is more germane.

Lewis said in an interview with the isportconnect website last February that he favoured the leading players in Wales being centrally contracted, pointing out that it would not happen without the agreement of a number of parties. “We’re not there at the moment but I’m still of the view that a more centralised approach to rugby in Wales is the way forward because we are a small country and the economic environment here is extremely challenging,” he went on. The regions want a more devolved form of governance, one which empowers them to look after the sport in their areas from the bottom up, but they say they have evidence that they have been told by the WRU not to involve themselves in the community game.