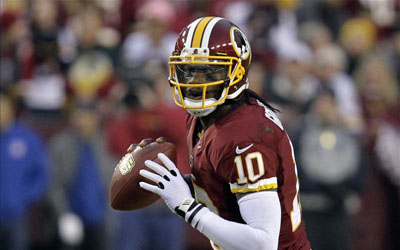 This agreement supports USAA’s Official Military Appreciation Sponsorship of the NFL and the Washington Redskins. The 2012 NFL Offensive Rookie of the Year was born on a U.S. military base and grew up in military communities across the country as his parents served in the U.S. Army.

“Growing up as a military kid, I’m thankful for the values instilled in me by my parents like integrity, commitment and excellence,” Griffin said. “They help me every day – both on and off the field. It’s an honor to help USAA support and pay tribute to the military community.”

Griffin was born at Camp Lester Naval Hospital in Okinawa, Japan, and played high school football at Copperas Cove High School near Fort Hood, Texas. He won the 2011 Heisman Trophy while at Baylor University, was the No. 2 pick in the 2012 NFL draft and led the Washington Redskins to their first playoff berth since the 2007 season.

“The Griffin family’s experience in the Army is like that of so many military families,” said Don Clark, executive director, USAA Sponsorship Marketing. “Through deployments and moves, they put the mission and their values first. We’re excited to work with Robert and say thank you to all military families.”

The 2013 season marks USAA’s third year as the Official Military Appreciation Sponsor of the NFL and the NFL Salute to Service initiative.

USAA provides insurance to 9.6 million current and former members of the U.S. military and their families.