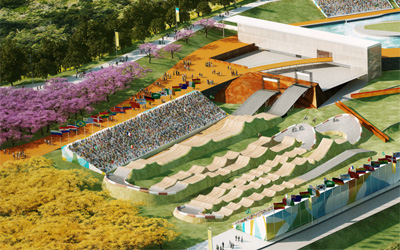 Organisers of the Rio 2016 Olympic and Paralympic Games have finally been able to announce that construction work has begun at the Deodoro Olympic Park.

The work started two years after it was originally supposed to and with only two years to go until the Brazilian city welcomes the world to the Games.

The Park is the second largest venue cluster of the Rio 2016 project, with eight sports set to be showcased in the area, inclduing BMX events (pictured).

“We are very proud to see work start on Deodoro Olympic Park.

“It underlines the important legacy that the Pan-American Games left to Rio, and the new confidence in the success of the Rio 2016 Olympic and Paralympic Games.

“Today, Brazil has a highly positive image due to the FIFA World Cup and I’m certain that our Games will be no different.”

Sadly for Nuzman however, preparations for Rio 2016 have given a poor image of the country’s hosting capabilities to the world.

In April, International Olympic Committee (IOC) vice-president John Coates said the preparations were the worst he had seen, whilst test events for some sports are looking increasingly unlikely.