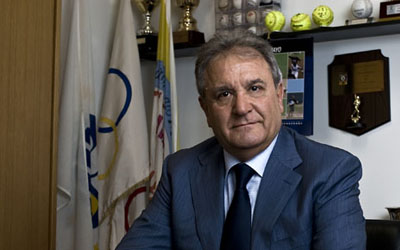 Italy’s Riccardo Fraccari has been elected as the first ever sole President of the World Baseball Softball Confederation (WBSC).

Fraccari was elected at the inaugural congress of the WBSC which was held in Tunisia. The Italian helped form the WBSC and was an interim co-President alongside softball’s Don Porter.

He will now serve as the lone President of the WBSC for an initial seven year term, through to 2021.

The Congress in the North African city of Hammamet, also elected their first executive board who are tasked with formulating short and long term growth plans for the young federation.

The initial election term, which applies to the entire WBSC Executive Board, was extended beyond 2020 by the Congress in Hammamet ahead of the elections, in order to better guarantee the new president and board a sufficient time frame with which to formulate/implement a mid- and long-term growth plan for the young international federation that is now challenged with overseeing a truly global and fortified baseball-softball movement that possesses an estimated sixty million athletes and hundreds of millions of fans.

Fraccari said: “I am tremendously honoured to be entrusted by my peers to lead the WBSC. This role comes with an unprecedented level of responsibility and commitment it’s an exciting and historic time, a ‘new era’, for baseball and softball.”

“I can already feel the weight of my shoulders.”

“President Porter’s historic contributions leave an invaluable legacy that will forever be a part of softball and both the birth and growth of the WBSC,” he said.

“I admire President Porter, and I plan to honour and help expand upon what he has built and all of us will continue to count on him to share his advice and knowledge.”