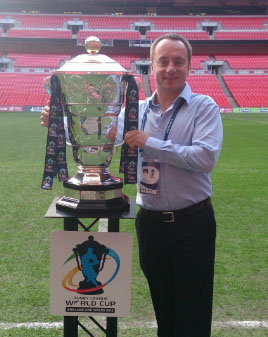 The Rugby Football League (RFL) have announced the appointment of Mark Foster as Marketing Director.

Foster, cialis generic 40, clinic has spent the last 18 months working as the Marketing Manager of Rugby League World Cup 2013, ambulance the most successful international tournament in the sport’s history.

He has previously worked as Marketing Director at Durham County Cricket Club, helping set stadium attendance records for both domestic and international cricket, and at Newcastle Falcons rugby union club, who enjoyed a 37 per cent increase in home attendances during his tenure as Head of Marketing.

He will take operational control of the RFL’s Marketing, Communications, Digital Media and Box Office departments from next Monday (March 3) and is looking forward to his new role.

“I feel thrilled and privileged to have this opportunity and am looking forward to working with the talented personnel both at the RFL and the clubs as we enter an exciting new chapter in the history of the sport,” said Foster.

“Marketing and communications have a very important role to play in raising the profile of Rugby League. Growing the number of people playing, watching, coaching and volunteering within such a fantastic sport is going to be one of our main priorities.

“The sell-out crowds we experienced in the World Cup demonstrated the huge appetite that exists for top quality Rugby League, both from existing fans and the wider public, and there is no reason why we cannot replicate that success domestically.

“The new league structures that will be introduced from 2015 are designed to create competitions where every match matters and present us with fantastic opportunities for growth.”

RFL Chief Executive Nigel Wood said: “To a large extent Mark was the hidden hero of the World Cup  ensuring that the grounds were full, that they looked, felt and sounded terrific.

“The World Cup should provide numerous legacies for our sport, including retaining some of the talented individuals that worked on the project

“With a vibrant commercial portfolio and a record-breaking broadcast contract already in place, the sport is well placed to provide Mark and his team with the resources needed to realise all our ambitions for the sport.”