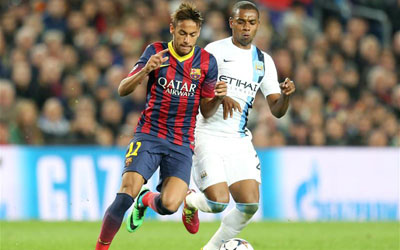 Real Madrid is placed second on 88 million with Manchester United third on 67 million.

Nadio Granata, managing director of numKrunch, says that the figures need to be placed in context.

“This does not automatically translate to 100 million fans of Barcelona nor the corresponding numbers for any other club. There will obviously be a cross over between followers on the different social media platforms with some people using more than one channel. Also, some people will follow more than one club. Finally, just because someone follows a club doesn’t mean that they are a fan. It is generally accepted that Manchester United, Real Madrid and Barcelona have the biggest global fan bases and many figures are quoted. It may be that in social media Barcelona and Real Madrid are followed most because they have the world’s two best players in Messi and Ronaldo.

“What is clear, however, is that social media helps to demonstrate the relative popularity of the clubs.”

In terms of attaching commercial meaning to the findings, it is useful to compare club sponsorship income to the data. IMR has recently produced a report on European football sponsorship which analysed the earnings of all major clubs on the continent.

Simon Rines, editor of European Premier League Sponsorship 2014/15, commented: “In the past the major European clubs had real difficulty in monetising their overseas fans. There may have been 100s of millions of people following the big European clubs, but there was little that the clubs could do to actually earn money from them. Replica shirt income was difficult because high-quality counterfeits could be bought for a fraction of the official price in most developing countries.

“Through social media, however, clubs can communicate with fans at low cost and, importantly, they can demonstrate to sponsors the data to prove both numbers and location. This helps to place a value on the rights. Crucially, it also allows clubs to help their sponsors communicate to the fans. This has to be done with caution – the interaction has to offer something, but when done creatively it can be both low cost and highly effective. Social media is therefore absolutely critical to the future development of the commercial performance of clubs.”