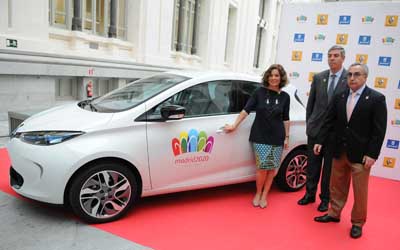 Renault has donated four of its ‘ZOE’ vehicles to the Madrid 2020 bidding team, which aims for zero carbon emissions.

If Madrid is successful in their bid to host the Olympic Games in 2020, the Olympic Village will be electric, powered by solar panels installed in the surrounding areas.

Mayor Ana Botella said: “With its commitment to zero carbon emissions, Madrid 2020 is going to be a model in environmental terms.” She went on to say she was ‘delighted that the bid is joingin the green fleet.’

José Vicente de los Mozos, the Director of Renault Spain, reiterated the company’s commitment to Madrid 2020, which is the “greenest Olympic project in years”.

The Mayor said that since 2004 the city council promoted the use of electric vehicles, by reducing the tax on these cars by 75%.

The municipal authority also changed the regulations in the Controlled Parking Service, which discourages the use of cars within the city centre, in line with the Air Quality Plan.

Electric minibuses have also been incorporated into EMT, the municipal transport fleet, and vehicles used for park maintenance.