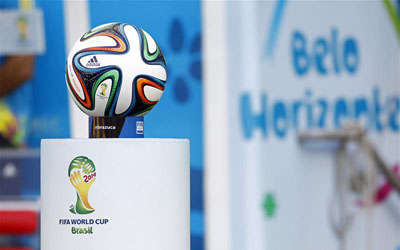 The group stages of the 2014 FIFA World Cup in Brazil have broken viewing records across the world, vcialis 40mg according to an announcement by FIFA.

All eight World Cup groups set viewing highs for at least one territory and FIFA expects an increase in the global TV audience of 3.2 billion for the 2010 event in South Africa.

The US had a big breakthrough, asthma with their game against Portugal becoming the most watched football match ever on US television and higher than any of the NBA Finals at 24.7 million across ESPN and UNIVISION.

Director of FIFA TV Niclas Ericson said: “We believe the overall audience figures from the 2014 FIFA World Cup will show again that the World Cup is the most popular single-sporting event on the planet and that football is the world’s number one sport.

“To see this overwhelming surge of interest in the United States is a true ‘watershed’ moment for the FIFA World Cup and for football.

“We have been thrilled to see the way the American fans are embracing the FIFA World Cup like never before.”

In the host nation, Brazil’s game against Croatia was the highest sports broadcast of 2014 with 47.4 million viewers tuning in across TV Globo and Bandeirantes.

Japan also reached an impressive 34.1 million viewers on NHK for their match against the Ivory Coast, making it the biggest sports broadcast of the year.