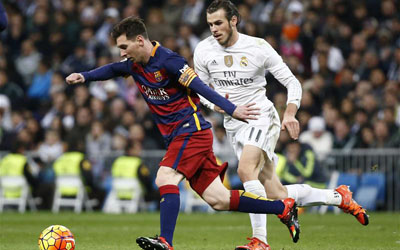 Spanish LaLiga giants Real Madrid and Barcelona were the highest-earning football clubs in the world in the 2014/15 season, according to the 2016 Deloitte Football Money League.

England’s Premier League boasts the largest number of highest-earning football clubs, with over half of its clubs making up the top 30. A record nine Premier League clubs are ranked within this year’s top 20, one more than in last year’s edition.

The Deloitte Football Money League measures a club’s earnings from matchday revenue, broadcast rights and commercial sources, and ranks them on that basis.

Real Madrid retained their place at the summit for an 11th consecutive year, with a revenue of £439 million, up from £418m the previous season.

Barcelona overtook Manchester United into second place with a revenue of £427m, compared to the English club’s £395.2m, which sees them fall to third due to a loss of £38m from the 2013/14 season. But United still remain the highest-earning Premier League club.

The Deloitte report predicts that United will be the highest earning club next year, saying: “The return to UEFA Champions League football, as well as the commencement of a number of significant commercial partnerships, will only strengthen the business in 2015/16.

“With this in mind, it would not be surprising to see United top next year’s Money League, with the club forecasting revenues of around £500m (around €650m).”