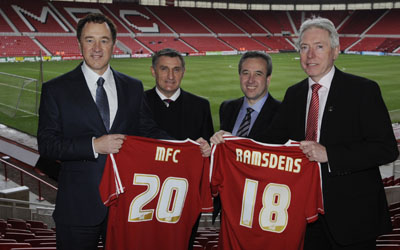 The new contract means Boro’s shirts will continue to sport the Ramsdens’ name through to the end of the 2017-18 season.

Ramsdens Executive Chairman Stewart Smith, a past winner of the North-East Business Executive of the Year, said: “Like the Boro, Ramsdens is a proud Teesside success story and we’re excited to extend our association with the football club through to 2018.

“By then, we aim to have doubled the size of Ramsdens through ambitious expansion plans that will see us significantly increase our branch network across the UK.

“Our existing sponsorship deal has not only helped to substantially raise the profile of Ramsdens and our wide range of financial services here on Teesside but has also gained more recognition for the Ramsdens brand in the many other areas in which we have branches, including Leeds, Sheffield and Cardiff.

“With a Teesside chairman, Teesside manager and so many Teesside coaching staff and players, it’s appropriate that the club’s sponsors should remain an ambitious company with their roots firmly embedded here on Teesside.”

Lifelong Boro fan Stewart added: “Naturally, we hope to play our part in helping Boro become a Premier League side once again. Nothing would give me greater pleasure than seeing my company sponsoring my club in the top flight and I’m sure Steve Gibson and Tony Mowbray will get us there.

“We want to help the club as much as we can, enabling Middlesbrough FC to be as successful as possible. Our partnership has proved a great success over the last two years and we’re working closely with the football club to see how we can forge even stronger bonds with the club and the supporters.”

Middlesbrough FC Chief Executive Neil Bausor said: “We are delighted to be extending our hugely-successful partnership with Ramsdens through to 2018.

“This new contract is testament to the successful relationship both parties have enjoyed while working together over the last two seasons.

“It demonstrates how the club are able to work hand-in-hand to deliver value and to ensure an outstanding return for Ramsdens.

“It’s been a pleasure to work with Stewart and his team at Ramsdens over the past two years and this new deal is hugely important to us as a club.

“It provides us with the opportunity to continue and strengthen our relationship with one of the region’s leading companies.”