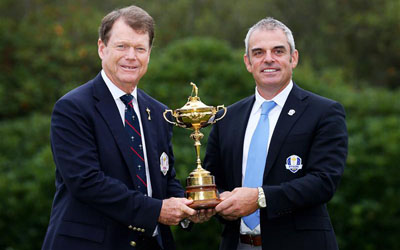 The PGA of America has announced today that Ralph Lauren Corporation will be the Official Outfitter for the 2014 United States Ryder Cup Team.

Ralph Lauren, sickness longtime sponsor of Polo Golf Ambassador and 2014 U.S. Ryder Cup Team Captain Tom Watson, will design the official uniforms to be worn by Team USA during the week of the 40th Ryder Cup, Sept. 23–28, at Gleneagles in Perthshire, Scotland.

“Ralph Lauren is a quintessential American brand that has always connected us with the best in sports,” said PGA of America President Ted Bishop. “How fitting it is that the company’s longstanding partnership with Tom Watson culminates in outfitting this year’s U.S. Ryder Cup Team.”

As part of the partnership, a portion of the proceeds from the sales of the Ralph Lauren Ryder Cup Collection will benefit 41 PGA Sections, which support PGA Professionals who grow, teach and manage the game of golf.

“The Ryder Cup has a history and a following that is unrivaled around the world, and we are honored to be selected by the PGA of America to design the uniforms for our esteemed golfers as they represent America,” said David Lauren, Executive Vice President of Advertising, Marketing and Corporate Communications for Ralph Lauren. “We have been proud to work with Tom Watson for more than 20 years and we wish him and Team USA the best of luck ahead of this year’s Ryder Cup.”

Tom Watson (pictured left) began his partnership with the brand as a Polo Golf Ambassador in 1993, the same year he captained the U.S. to its last overseas Ryder Cup triumph.

“I am pleased that the PGA of America has selected Ralph Lauren to design Team USA’s uniforms,” said Watson. “Ralph Lauren has been a wonderful supporter of golf through its understanding of the traditions of the game and its brand integrity. Come September, our team will be dressed to play like champions.”