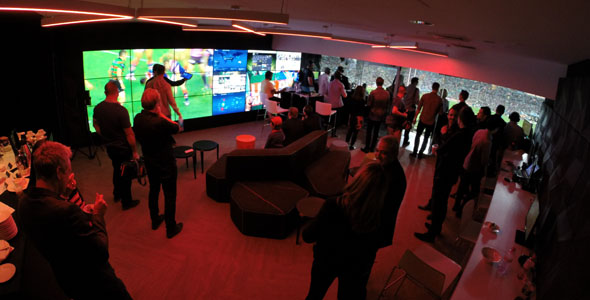 We have written about our vision for a “connected stadium” in an earlier column of iSportconnect; designing with the latest technology infrastructure in mind and considering how this can benefit the many stakeholders involved in the live sporting experience. Today we are considering one of these stakeholders in particular, the sport’s Sponsors.

The pioneers in sport sponsorship are looking to use a stadium’s technology investment to position their brand, show innovation, and create unique and exciting experiences for their customers. We have been working with one such sponsor in Australia to create a new kind of space by taking a former stock standard hospitality suite at ANZ Stadium in Sydney and turning it into a whole new technologically immersive experience for the fan. My colleague, and head of Activate in Australasia, David Fleming explains.

Telstra is Australia’s largest telecommunications company. It is the naming rights partner of the Telstra Premiership competition and Internet and Mobile partner of the National Rugby League.  Telstra was also integral to ANZ Stadium’s achievement as the first venue in Australasia to offer free Wi-Fi to all fans in and around the Stadium.

Telstra briefed Populous Activate to “totally reimagine” a hospitality suite at ANZ Stadium and create something entirely new in connectivity for the fans. It wanted to capitalize on its recently installed Wi Fi and its vision for the NRL so it needed to be completed in time for the 2014 National Rugby League (NRL) Grand Finals. The result was “The Connected Lounge”, an imaginative and interactive technology centre delivering content simultaneously using several platforms.

Telstra’s Group Media Manager, Matt McCann was clear the redesigned lounge was not to be exclusively for corporates.  “We wanted it to be the next part of Telstra’s strategy to provide brilliantly different experiences for all our fans and customers.  We wanted to use technology to bring fans closer to the action, keeping them “connected” in an environment and atmosphere that was exciting,” he said.

Telstra’s Connected Lounge is the first such corporate suite of its kind in Asia where a sponsor’s customers, NRL fans and partners all have a chance to be part of a new type of live game experience.

Some of the features of this interactive technology centre included:

•           Ability to promote Telstra loyalty initiatives to their customers in the form of instant ticket upgrades or a chance to visit the Lounge in real time.

“The Connected Lounge is the blueprint of how we’ll continue to deliver on our Connected Stadium strategy at our other stadiums throughout Australia, and how we’ll engage with customers and fans through digital channels,” said Matt McCann.

“We want to connect with our customers on a personal and meaningful level through tailored content, to deliver on Telstra Media’s strategy to create different content experiences anywhere, anytime on any screen.”

At Populous, we do not believe developing digital activations like Telstra’s Connected Lounge is the exclusive domain of the telecommunication or digital companies.  With the consumer expecting she or he will always be “on” (and every leading company knowing it must embrace the potential of digital into its business model), we anticipate there will be more and more exploitation of digital infrastructure by brands, both at stadiums and other venues.

David has worked in the commercial side of sport and entertainment for over 15 years. A former member of the National Sponsorship Association, David has worked extensively in sponsorship, having acted on behalf of both brands and rights holders. He is now applying that expertise to Populous’ core business, helping design business outcomes for different sporting stakeholders such as Sponsors, Sporting codes, Government and Stadium owners.

Recent commissions include working with the ACT Government on a blueprint to develop the cultural masterplan for the City to the Lake in Canberra; commissions with brands such as Coca-Cola Amatil and Telstra on sponsorship activation at venues; working with Stadiums Queensland to identify strategic sponsorship opportunities at both Townsville and Skilled Park on the Gold Coast, and assisting Sydney Showgrounds in the development of sponsorship assets around the Royal Sydney Show. David is also working with several high profile Populous Clients in Asia on sponsorship opportunities around venues under construction.