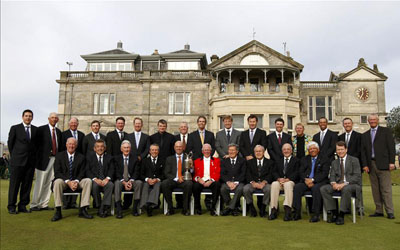 The Royal and Ancient Golf Club (R&A) has confirmed on Thursday that women members will be allowed to join for the first time in its 260-year history.

The R&A’s 2,400 members were allowed to take part in the vote, which was passed by a margin of 85 per cent in favour to 15 per cent against.

“This is a very important and positive day in the history of the Royal and Ancient Golf Club,” chief executive Peter Dawson said.

“The R&A has served the sport of golf well for 260 years and I am confident that the club will continue to do so in future with the support of all its members, both women and men.”

Dawson added that the decision will take place with immediate effect and a “significant” initial number of women will be fast-tracked to membership in the coming months to avoid the long waiting list.

Before Thursday’s vote, women could play on the Old Course at the St Andrews venue but they could not join the club, which is widely regarded as the ‘Home of Golf’.

The Ladies Professional Golf Association (LPGA) welcomed the results in a statement which read: “The LPGA is happy to hear that the members of the Royal and Ancient Golf Club in St Andrews have voted to include female members.

“This decision is certainly a step in the right direction and one that better captures the current diversity and inclusiveness of our great game.”

Pressure to allow female members had been mounting from sponsors, with HSBC’s global head of sponsorship and events Giles Morgan saying in January that: “The R&A are clear that it’s a very uneasy position for the bank.”

Responding to the vote on Thursday, Morgan said: “As a partner of the R&A and a long-term international sponsor of golf, we welcome this news with open arms.”

The vote means St Andrews, which is due to stage the British Open in 2015, follows the Augusta National Club in the United States.

Augusta, which hosts the Masters, admitted two women members for the first time in its 80-year history in 2012.

There are still three British Open venues which currently have male-only membership – Muirfield, Royal St George’s and Royal Troon, which has separate men and women’s clubs.