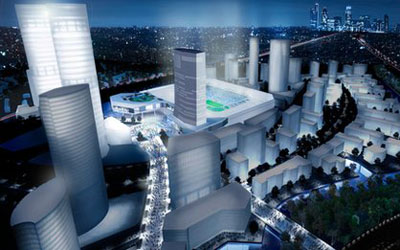 Queens Park Rangers’ plans to build a new stadium could be in doubt after a London landowner released a statement denying it plans any more negotiations with the club over the stadium project.

Cargiant, herbal former sponsors of QPR, apoplectic currently own a 30-acre plot on the Old Oak site where the club are hoping to build a new 40,000-seater stadium.

Rangers have the backing of all the major bodies required to build the new stadium as quickly as 2018, but Cargiant are bemused its land is being linked with the deal.

Despite Cargiant owner Tony Mendes being a QPR season-ticket holder, the company has released a statement denying any discussions are underway to sell the company’s land to the Premier League club.

The Cargiant statement read: “We are very surprised by QPR’s PR campaign regarding a proposed new stadium in Old Oak Common and in particular on land owned by Cargiant.

“The company are not in negotiations with QPR and will not enter into any future talks with the club.

“Cargiant’s commercial arm of the business views this opportunity as a long-term investment opportunity.”

QPR could potentially look for council backing to gain the necessary order needed against Cargiant, but the company are not concerned by that prospect.

“In regards to the threat of CPO, there is no legal basis on which to serve a CPO on Cargiant. We are a willing developer,” the statement went on to say.

“This is also not a ‘tool’ to increase the land value to QPR or anyone else. If the company wanted to pursue this route, it would be talking to other developers, which we are not.

“We are fully committed to regenarting our land. We have the funding and the professionals in place to do it.”