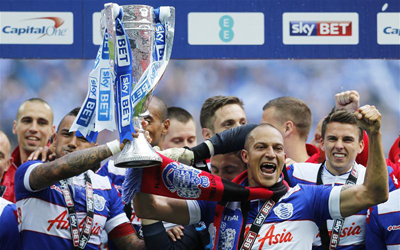 Queens Park Rangers have celebrated promotion back to the Premier League with the signing of a new shirt sponsorship deal with AirAsia.

The one-year extension deal will commence from the start of the 2014-15 Premier League campaign and will see the AirAsia logo on the front of QPR’s home, unhealthy away and third strip.

QPR Commercial Director, sale pills Euan Inglis, told the club’s official website: “We are delighted that AirAsia have agreed to extend their association as the club’s lead partner for a fourth consecutive season.

“Our relationship with AirAsia continues to develop year on year, as we collectively look to expand and roll out collaborative commercial and socially aware initiatives in key territories as demonstrated by the hugely successful AirAsia QPR coaching clinics, which were held in Singapore and Malaysia earlier this year.”

The West London club and the airline have worked together for the past three years, in a period where QPR suffered relegation to the Championship.

The club ensured Premier League football would be played at Loftus Road again after beating Derby County in the Championship playoff final at Wembley Arena in London.

AirAsia Malaysia CEO, Aireen Omar, said, “We would like to congratulate QPR for their promotion to the Premier League next season and we are proud to be continuing our sponsorship with them. The partnership that we have with QPR goes beyond branding benefits, as we work closely together in many initiatives, including lifting football standards in Asia through coaching clinics and training opportunities.

“We hope that the club will continue to show the same determination and energy in achieving the best results in every fixture, synonymous with our very own effort and tenacity in being the world’s best low-cost airline.

“We look forward to a fruitful partnership and a fantastic season with QPR.”