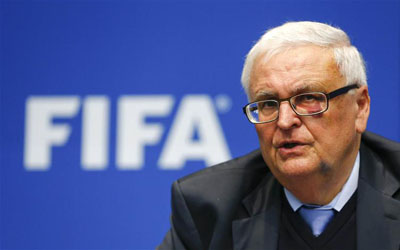 The 2022 FIFA World Cup will not be held in Qatar due to the Middle East country’s extremely hot temperatures, according to FIFA Executive Committee member Theo Zwanziger.

“I personally think that in the end the 2022 World Cup will not take place in Qatar,” the German told Sport Bild on Monday.

“Medics say that they cannot accept responsibility with a World Cup taking place under these conditions.”

Former German football (DFB) chief Zwanziger, is now a member of world football’s governing body FIFA, who awarded the tournament to Qatar in 2010.

Qatar insist that a summer World Cup can be held in the country thanks to cooling technologies it is developing for stadiums, training areas and fan zones, however there is still concern over the health of the players and visiting supporters.

“They may be able to cool the stadiums but a World Cup does not take place only there,” said Zwanziger.

“Fans from around the world will be coming and traveling in this heat and the first life-threatening case will trigger an investigation by a state prosecutor.

“That is not something that FIFA Exco members want to answer for.”

Speaking to Reuters, FIFA officials claim Zwanziger was not giving the view of all the powerful Executive Committee.

“He is expressing a personal opinion and he explicitly says so,” said FIFA spokeswoman Delia Fischer.

FIFA is planning to shift the tournament to a European winter date to avoid the sweltering summer where temperatures rise to over 40 degrees.

Asian Football Confederation (AFC) president Sheikh Salman Bin Ebrahim Al Khalifa chaired a meeting to discuss the matter earlier this month with the options of January/February 2022 and November/December 2022 offered as alternatives to June/July.

In May, FIFA President Sepp Blatter admitted that awarding the World Cup to Qatar was a ‘mistake’ and the tournament would probably have to be held in the European winter.

“Of course, it was a mistake. You know, one comes across a lot of mistakes in life,” he said.

“The Qatar technical report indicated clearly that it is too hot in summer, but the executive committee with quite a big majority decided all the same that the tournament would be in Qatar.”