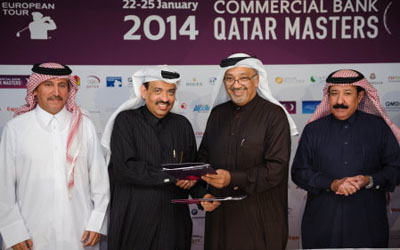 Hamed Al Marwani, Chief Administrative Officer, QAFCO, commented: “We are delighted to be involved with this event. We have strong roots in Qatar and a long history of sporting sponsorship here, so it is a sincere partnership between us and one of the Middle East’s most prestigious sporting events. This is a tournament not only for golf enthusiasts, but one for families, and our involvement in the Kids Zone aims to expand that reputation even further.”

Abdulla Saleh Al Raisi, CEO Commercial Bank, added: “With QAFCO supporting the brand new Kids Zone at Commercial Bank Qatar Masters, it really is an event for the whole family and reaches out to a wide audience locally, regionally and globally. We look forward to working together further to continue to raise Qatar’s profile on the world’s sporting stage. These are exciting times for both of us.”

The Qatar Fertiliser Company (QAFCO), was incorporated in 1969 as a joint venture, and is currently owned by IQ, Fertilizer Holdings AS and Yara Netherland BV. An established supporter of sport in Qatar, QAFCO conducted its 24th Annual Tennis Open Championship in 2013, in association with the Qatar Tennis Federation.