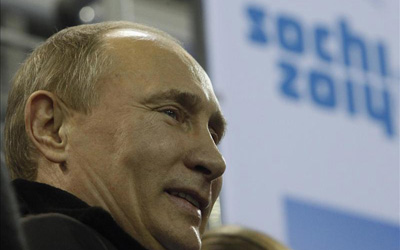 Russian President Vladimir Putin has signed a new law that will allow private companies to swap facilities built for the 2014 Winter Olympic Games in Sochi for government land.

The law, order which came into effect on Monday, means that all privately-owned Olympic facilities and the ones under the Olimpstroi Corporation, will be eligible for the swap.

Olimpstroi, founded in 2007 and set to be dissolved at the end of the year, was created to build venues such as the Fisht Olympic Stadium and the Bolshoi Ice Dome.

It is believed that Russian Railways could benefit the most from the new law, with reports saying that many of the railroads in and around Sochi would qualify.

The government would have to purchase railroad sites from Mechel, a company with severe debt, with value of the railroad coming from its closeness to the Elga Coal Deposit – one of the biggest in the world.

F1 track to be complete in August

In other news, the Formula One track in Sochi is set to be complete by August 10.

The country’s Deputy Prime Minister, Dmitry Kozak said: “The construction works are going according to schedule, and by August 10, the construction and installation work at the site should be completed.

“For a long time, since the Soviet Union, there has been a dream of having a Formula One race in our country. Here, if it had not been for the Olympic Games, we would not have had a chance to have the race.”