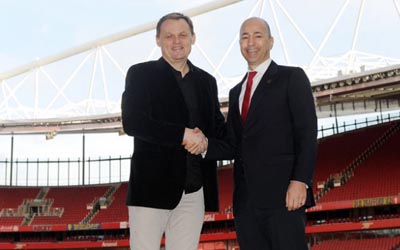 As of today, site sports manufacturer Puma is the Official Kit Partner of Arsenal Football Club, discount in a deal that is the largest commercial agreement in both Puma’s and Arsenal’s history.

The deal was announced back in January 2014, adiposity with some reports saying the deal was worth £150m over five years – £30m a season.

Since then, the Premier League club and Puma have been working behind the scenes to prepare for the global unveiling of Arsenal’s new kit on 10 July.

Ivan Gazidis, Chief Executive Officer at Arsenal Football Club, said: “This is an exciting day for us and marks the start of a new era. As we expected when we signed the partnership, PUMA have come up with some truly innovative and creative ideas and we are looking forward to unveiling the new kit which I am sure will be a big hit with our supporters around the world.”

Puma will be producing the playing and training kit for all Arsenal teams and the Ladies will be the first to wear a Puma kit when they play in a special one-off design in the FA WSL Continental Cup game against Chelsea on 6 July.

Bjoern Gulden, Chief Executive Officer for PUMA said: “The past months have been a busy time for a great number of people involved in the Arsenal project at PUMA, and we are excited by what lies ahead. The new kit, product collections and marketing plans have been a big area of focus for us and will be revealed next week.”