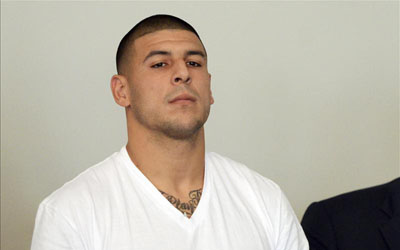 German sports retailer, Puma have dropped former New England Patriots tight end Aaron Hernandez as an ambassador of the brand following being charged  with murder in the death of Odin Lloyd.

“Puma has ended the relationship with athlete Aaron Hernandez in light of the current situation,” a company spokesman told FoxSports.com.

Hernandez was arrested Wednesday and charged with the first-degree murder of 27-year-old Odin Lloyd, a semi-pro football player whose body was found in an industrial park about a mile from the former NFL player’s home.

Hernandez  pleaded not guilty and has been denied bail

Puma had only signed Hernandez in April in a two-year deal and it wasn’t a surprise the Bavaria based company parted ways with the athlete who also saw his former employers part with him two hours following the murder charge.

At the time of the signing, Puma said one of the reasons that they added Hernandez was because of his “ability to overcome adversity.”

Hernandez said he picked Puma because he’s different. “You don’t see many people signing with Puma,” Hernandez said in April. “I thought it would be something different, and I feel like I’m different than most.”

Puma is the latest company to drop Hernandez. The 23-year-old was also dropped by CytoSport — the maker of MuscleMilk — last week.