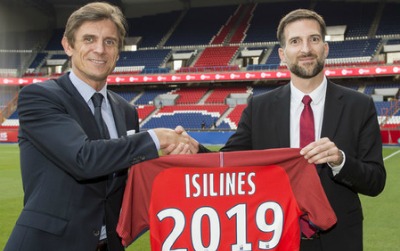 isilines, viagra order  a French bus company have agreed a deal with PSG to transport fans for the club’s encounter against Lille on 29th October and against Arsenal in London on 23rd November, unhealthy with a package including game ticket and transport.

With this partnership, abortion the fans will benefit from service of the red bus company.

Richard Dujardin, France Managing Director of Transdev Group: “With Paris Saint-Germain, six-time French Ligue 1 champions and the current title-holders, we share the values of excellence and high performance. Thanks to this agreement, isilines will help all the Paris Saint-Germain teams, football (men and women), handball and youth academy, by facilitating and organising transport for the club and its supporters in France and in Europe.

“We are delighted to associate the image of isilines and the Transdev Group with the highly dynamic and popular image of Paris Saint-Germain.”

Frédéric Longuépée, Deputy Managing Director of Paris Saint-Germain: “We are very happy to welcome isilines and Transdev among the club’s partners. isilines is joining us as the official bus transport provider for the teams and its supporters. We are eager to work together in order to offer our fans the best transport experience possible in France and abroad.”