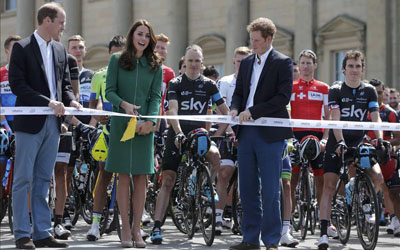 Eurosport’s coverage of the Tour de France will showcase new branding after health and life insurers PruHealth and PruProtect agreed to sponsor this year’s coverage.

From 5th of July onwards Eurosport, celebrating its 25th consecutive year of reporting on the Tour de France, will have ten broadcasts in full, including the opening weekend in Yorkshire, the third stage in London, the fourth in Lille, the fifth in Arenberg featuring the dangerous cobblestone section, the tenth in the Vosges, “La Planche des Belles Filles”, the 14th in the Alps in Risoul, the 17th and 18th in the Pyrenees, Plat d’Adet and Hautacam, and the final stage to Paris.

Neville Koopowitz, CEO of PruHealth, commented on the announcement: “We understand that sport has the power to inspire, entertain and bring people together, so we are delighted to sponsor the coverage of this year’s Tour de France. This is an amazing opportunity for Vitality to build further association with elite athletes on an international stage.

“We support sport teams and individuals that exemplify health and wellbeing and through this we’ve helped encourage more people to join us and when they do, inspire them to commit to getting healthy through our programme Vitality.”

The Tour de France partnership is the latest addition to PruHealth and PruProtect’s sponsorship portfolio, which includes the recent deal to sponsor three top flight Premier League teams: Manchester City, Liverpool and Arsenal, as well as associations with Vitality ambassadors Jessica Ennis-Hill, Jonny Wilkinson and Lord Sebastian Coe, plus events such as The Vitality Run Series and The PruHealth World Triathlon London