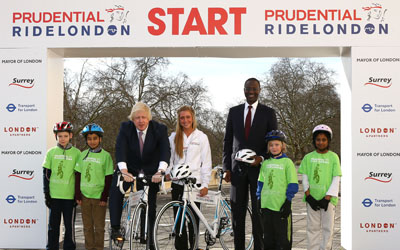 Prudential RideLondon is a new two-day cycling event that hopes to form a key strand of the post London 2012 legacy.

The festival will be held on 3-4 August 2013, allergy will feature over 70,000 cyclists, including some of the world’s top cyclists and will take in parts of London and Surrey.

Commenting on the announcement, the Mayor of London, Boris Johnson said: “Following the superhuman efforts of our Team GB cyclists last year, thousands of cycling enthusiasts, both experienced and amateur, riding a fantastic route through the streets of our fine city is surely a fitting legacy.

“I am delighted that six months on from Laura Trott’s breathtaking gold in the Omnium we are in a position to announce the routes and title sponsor. Prudential RideLondon is sure to become one of the world’s top cycling events, the countdown to the start of the event begins now!”

“I am confident that this exciting, annual event will become both a global showcase for London and a leading mass-participation sporting festival, promoting the values of healthy, active lifestyles for people of all ages throughout Britain.”

London & Partners Head of Major Events Iain Edmondson added: “Prudential RideLondon will show off the best of the capital from the historic and traditional to the modern and quirky. Starting in the Queen Elizabeth Olympic Park close to the Olympic Velodrome – the city’s newest world-class cycling venue, currently bidding to stage the 2016 World Track Cycling Championships – Prudential RideLondon strengthens London’s commitment to build a legacy of international sport following the 2012 Olympic and Paralympic Games.”

Highlights of the festival will be shown on BBC TV.