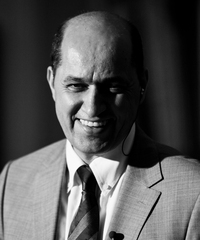 The Turkish Basketball Federation has come a long way in the past 20 years. Our vision was to create success on the court and to position Turkey as one of the leading basketball nations in the world.

We have focused and prioritised our work to achieve this. In 2010 our men’s team won the silver medal at the World Championship and in 2011 our women’s team won silver at the EuroBasket and now they are playing in the Olympic Games.

We don’t believe in coincidences. We believe in long term planning and hard work. This year we launched our new strategic plan and our focus is clear. We believe that the key to running a successful sports federation is sports success. However that is not achieved accidentally. Success at the highest level depends on the strength of the entire sports development system. We work systematically to increase participation, identify and develop talent and ensure that our medal winning performances inspire the next generation of players.

To support our sports development system we have identified two other key areas of activity – hosting major sports events and professional and innovative marketing.

The Turkish Basketball Federation is the only federation in the world to have hosted and been selected to host all major international basketball tournaments. In 2001 we hosted the Men’s EuroBasket, in 2005 the Women’s EuroBasket, in 2010 the Men’s World Championship, in 2012 we hosted the Euroleague Men’s and Women’s finals and in September we will host a leg of the new FIBA 3×3 World Tour. 2014 will be a special year for us as we will be hosting the Women’s World Championship.

We do this because it inspires our players to fight harder and it gives our fans a chance to see their idols live. By hosting major basketball events we have placed basketball at the top of the national sports agenda and gained respect in the international basketball community.

We are now also working to ensure that we increase the value of TBF through an effective marketing strategy. Commercial partnerships, social media and PR are key elements of our marketing activities.

Managing a sport federation is different from managing a business. At the heart of what we do is basketball. It is our sport that drives us. We are therefore more excited than ever that our women’s team have made it to the Olympics. This is what it’s about.

Their hard work will inspire thousands of children in Turkey to play basketball and pursue a healthy life style.

Basketball has the power to change lives and to change the perception of our nation. We know this and we take our responsibility very seriously.

This is our way to success. This is Turkish Basketball.

During his career as a player Turgay Demirel also managed to establish his reputation as a talented and successful business man. The combination of management skills and his passion for Basketball has led to a 20 year term as the President of the Turkish Basketball Federation as well as a valued member of the international basketball family including positions as FIBA Europe Vice President and FIBA Finance Commission member.