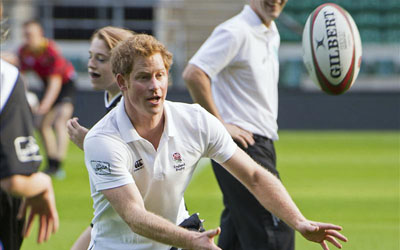 Prince Harry is a big fan of the sport and is also currently Vice Patron of the Rugby Football Union (RFU).

As Honorary President, the Prince will play a big role in welcoming the 20 qualifying nations to the Rugby World Cup 2015.

England Rugby 2015 CEO, Debbie Jevans, commented: “With one year to go to the Tournament, we are delighted to announce that Prince Harry has agreed to be our Honorary President.

“The Prince is a great Rugby fan and recently inspired us all with the Invictus Games. We have no doubt that he will help us achieve our aim of staging a Tournament that reaches out to new and existing Rugby fans.

“Our plans are fully on track and we are very pleased with the demand for tickets since they went on general sale on September 12.

“We still have a year of hard work ahead of us but with the Team Bases announced, the venues and city plans being finalised, excellent support from our stakeholders and tickets on sale we are able to move forward with confidence.”

International Rugby Board and Rugby World Cup Limited Chairman, Bernard Lapasset, added: “One year to go is a major milestone on the road to a Rugby World Cup that promises to be a very special and record-breaking global celebration of Rugby and the host nation.

“Rugby World Cup 2015 is on track to be the best-attended, most viewed and most-engaged with Tournament to date, furthering the growth and development of Rugby worldwide.”

Minister for Sport and Tourism, Helen Grant, said: “I am delighted with the progress that the England Rugby 2015 team are making with one year to go until the start of the Tournament.

“Prince Harry will be a fantastic Honorary President for the competition, with his great love of the sport and his experience putting on a fantastic Invictus Games.

“Rugby World Cup 2015 will further build on this country’s excellent reputation for putting on major sporting events. It will leave a great legacy for the sport, boost tourism and help grow the economy.”

RFU Chief Executive Ian Ritchie said:” With a year to go to the Tournament, the RFU is determined that hosting the Tournament will enable us to grow Rugby in England and to create a meaningful legacy for the game.

“With that in mind, we are already investing and activating in a variety of key areas.  I cannot think of anyone more appropriate than Prince Harry, who loves his Rugby, to be Honorary President of England Rugby 2015 to help us achieve that objective.”