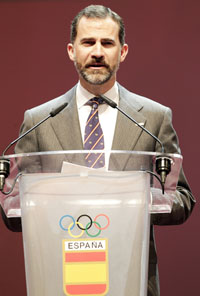 The news comes after Prince Felipe’s audience last Thursday at the Palacio de la Zarzuela with the Madrid 2020 Foundation Trust, headed by the Mayor of Madrid Ana Botella and Madrid 2020 Bid President Alejandro Blanco, who presented him with the Candidature File.

Reacting to Prince Felipe’s acceptance, Blanco, who is also the president of the Spanish Olympic Committee, said: “This is wonderful news for the Madrid 2020 Bid and is a further indication of the royal family’s total commitment to Spanish sport.

“HRH Prince Felipe was Spain’s flag bearer at Barcelona in 1992 and he will carry the flag again for the Madrid 2020 Bid, which is not just for the city of Madrid but for the whole of Spain.”

The Prince of Asturias’ decision to accept the honorary presidency is a sign of his support for Madrid’s Olympic project, support that he expressed to the members of the Trust in his audience with them last week and which he has given in the hope that the Bid wins the right to host the 2020 Games.

Prince Felipe’s acceptance of the honorary presidency continues the Spanish royal family’s longstanding involvement in the Olympic movement, with various members of the royal family having attended and also competed in recent Games.

Since Madrid embarked on its bid to host the Summer Games, the Spanish Olympic movement has received the wholehearted support of His Majesty King Juan Carlos and his family.

Speaking in 2004, at the presentation of the 2012 Bid, the King said: “In keeping with the great excitement that the 2012 Olympic Games has aroused in the people of Spain, the Spanish Crown would like to wish the Madrid project every success and is certain that it will represent Spain and its people in the best possible manner.”

King Juan Carlos also spoke of how “privileged” the royal family felt in joining the Olympic family on so many occasions.

In 1995, His Majesty accepted the honorary presidency of Barcelona’s 1992 successful bid to host that year’s Olympics, where Prince Felipe was the Spanish team’s flag bearer.

The royal family’s support also extends to the Paralympic Games. Her Royal Highness Infanta Elena is the honorary president of the Spanish Paralympic Committee, and as well as playing an active role in the movement, she also heads Spain’s Paralympic Games delegation.