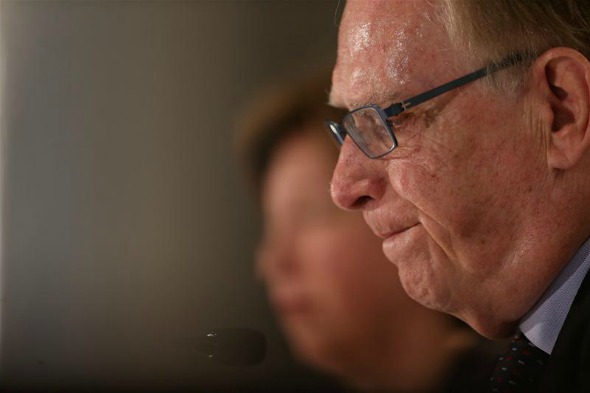 Pressure Increases for Olympic Ban on Russia by Michael Pirrie

McLaren and his team found a catastrophic catalogue of doping violations and manipulations,which saw Russia’s laboratories in Moscow and Sochi protecting doped Russian athletes at the Sochi Winter Olympic Games.

**MICHAEL PIRRIE looks at the impact of the McLaren Report into Russia’s State Sanctioned Doping program, and the implications for the Olympic Movement and fight against doping.

The World Anti-Doping Agency’s crusade against drugs in sport has led to several international and regional flashpoints since it was established in 1999, including and involving athletes from China, theUnited States, parts of Europe, some former Soviet bloc states and other nations. The axis of the worldwide anti-doping movement, however, is now rotating around Russia with the force of a category 5 cyclone following shock revelations in the WADA McLaren report of high-level government and secret service backed doping that heralds an unprecedented challenge to elite sport and honest athletes as well as the Olympic Movement.

McLaren and his team found a catastrophic catalogue of doping violations and manipulations, which saw Russia’s laboratories in Moscow and Sochi protecting doped Russian athletes at the Sochi Winter Olympic Games.

Russia’s doping programme, which was directed by the Russia Sports Ministry and involved the Russian Secret Service, included manipulation of doping analysis and substitution of test samples, creating an unprecedented crisis for the Olympic Movement on the eve of the Rio Olympic Games.

A new Cold War in international sport could be looming pressure mounts for a complete ban on Russian athletes at Rio next month, andRussia calling on influential supporters in world sport and international diplomatic circles and beyond to help its Olympic lobbying effort for Rio inclusion and limit reputational damage from the report.

McLaren’s findings will also test sporting and diplomatic ties and loyalties amongst leading nations and figures in the Olympic Movement and global sport in the search for solutions to the Russia doping crisis and to prevent such situations reoccurring.

There is also an urgent need to determine as soon as possible if the scale of the government sponsored doping program revealed byMcLaren is largely confined to Russia or maybe more widespread, amid concerns about what else might be happening in other nations and sports to conceal similar if less centralized and sophisticated covert doping operations.

The argument that the McLaren report centered onRussian doping at its own Sochi 2014 Winter Olympic Games and is, therefore, not relevant to considerations about competing in Rio or other international event is highly misleading and flawed.

Indeed, McLaren found that Russia’s state-backed doping system was likely to affect every sport across the board, both summer, and winter.

Russia’s actions are a betrayal of all sport and the values of sport everywhere, and of the Olympic Movement. If anything, theMcLaren report lends weight to the IAAF’s recent decision to continue its ban on Russian track and field athletes at international events, and will no doubt lead to calls for further action against the rogue sporting nation.

This could include a full ban from the Rio Olympics, possible expulsion from the Pyeongchang 2018 Winter Olympic Games, or suspension from theOlympic Movement, although Russia’s National Olympic Committee was not implicated in the report.

The full involvement of Russian teams and athletes at upcoming Olympic and international events, however, may be hard to justify givenMcLaren’s admission that only “a very narrow slice” of the total picture of Russia’s covert doping methods has been uncovered in his investigations.

The McLaren report has shattered the perception that doping is primarily linked to low-level cells of corrupt athletes operating below the radar in loose collaboration with small teams of doctors, coaches and corrupt officials.

The report reveals how highly organized structures and systems can be put in place and operate behind the scenes, even in government laboratories,to enable corrupt athletes and officials to engage in doping activity and avoid detection.

The McLaren report is a devastating indictment of how highly organized and sophisticated modern day doping operations can be hidden from the world at large to give the appearance of national compliance with international protocols for sports performance.

The unprecedented scale of Russia’s doping program has surprised even veteran Russia watchers, and is likely to split its traditional geopolitical power base, with many Russia apologists and backers believing Russia’s corruption of the WADA doping code has gone way beyond what the international community and fellow Olympic nations can be expected to tolerate or forgive.

The fight to participate in the Olympic Games, the world’s biggest and most spectacular sporting event, is about much more than sport for Russia and President Putin – its also about the role elite international sport can play in foreign policy and intelligence, the doors it can open in trade and business and outcomes it can influence.

And its about the role Russia plays hosting and funding major world sporting events, including the 2018 FIFA World Cup, and the influence this gives Russia that can be exerted in international settings and gatherings.

Russia’s image as a sporting superpower and leading Olympic nation close to the top of the medal table is vital to its global and national image and is the reason behind its extensive doping regime to achieve sports supremacy.

Russia began its crisis management plan in anticipation of the McLaren report with a series of pre-emptive statements several days before the report was released.

These included calls for the dissolution of the IAAFfollowing its decision to maintain a ban on Russian athletes competing at international events including the Rio Olympics for doping violations. There were even suggestions that such a ban would threaten the Olympic Movement.

Wrong. While the modern Olympic Movement began with 14nations and about 240 athletes competing at the inaugural Olympic Games inAthens in 1896, the movement’s flagship event has grown to become the world’s biggest global gathering of nations, most iconic brand, most popular, inspirational, and successful peacetime event that now involves more than 200 nations and 10,500athletes and officials.

The Olympic Games has survived funding shortfalls,world wars, athlete assassinations, bribery scandals and it will survive a banon Russian athletes implicated in a system of corruption.

The Olympic Movement has also seen many doping scandals but nothing on the scale of the manipulation revealed by McLaren, and it is the sheer scale of this institutionalized doping activity that attacks and threatens the credibility of sport so fundamental to the enduring global appeal of the Olympic Games to sponsors, hundreds of millions of spectators and the world’s youth.

The McLaren Report vindicates the accuracy of the information provided by courageous athletes and laboratory insiders and whistleblowers, and related media investigations that were the catalyst for the investigation and report.

While the scale of the doping revealed in Russia was so vast that it could not have been considered possible at the time WADA was established in 1999, the circumstances surrounding the McLaren report show that more robust doping detection system is urgently needed so that such corruption is not so dependent on a small number of brave people in the athletic, sports administration and media communities willing to do the right thing when confronted with doping situations.

The leadership shown by IOC President Thomas Bach in modernizing the Olympic Movement will be pivotal to reforming the world antidoping procedures and addressing deficiencies identified in the McLarenReport in order to restore confidence in sport worldwide.

While the testing of blood and other body fluids has long been the cornerstone of efforts to identify and disqualify dishonest athletes involved in doping, the McLaren report shows how limiting such testing can be, telling little about what might be happening in laboratories at the time of test analysis.

The IOC President has already recently requested WADA to convene an extraordinary world conference on doping to fully review the antidoping system and consider further developments and new tactics in the fight against doping, with a stronger emphasis on the gathering of doping related intelligence and information expected.

Better clarification of the roles and responsibilities of the key stakeholders in Olympic and international sport is also seen as important,along with greater harmonizing of efforts undertaken by countries, governments and athletes to combat doping at local levels.

This could include government support for the removal of medical certificates from doctors involved in doping activity.

The role of the International Federations will be even more important moving forward, helping national members to address doping in their sports and preventing doping problems surfacing at international sporting events. For example, the work done by the World Baseball and Softball Federation in helping the MLB to adopt the WADA code and stem the epidemic of steroid use in the league.

With so little time before Rio to absorb the lessons and insights from McLaren, the focus must be on determining Russia’s level of participation at the Olympic Games in Rio, and whether independently tested and clean athletes from Russia can compete, although whether they do so under a neutral or Russian flag would not seem to a priority at this stage for the international community.

What matters most to the international community and especially to sports fans and young people now is that decisive action is taken and seen to be taken to stamp out corruption in sport – decisions and actions that demonstrate new ruthlessness and willingness to protect honest athletes; that show a total commitment to zero tolerance; and send the strongest possible message to sports officials, governments and international federations that weaknesses in the anti-doping systems of their sports and in national institutions, governing bodies testing centers and amongst personnel involved in anti-doping operations must be addressed immediately or face the ultimate penalty of Olympic disqualification.

**Michael Pirrie is a senior international communications and media strategist and commentator on Olympic and world sport.Michael was Executive Adviser to the London 2012 Olympic Games executive office and chairman Seb Coe.