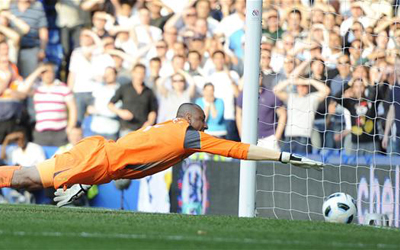 The Premier League will use goal-line technology (GLT) from the start of the 2013/14 season.

The news comes just weeks after FIFA confirmed GLT would be used at the 2014 World Cup and the 2013 Confederations Cup.

Premier League spokesman, Dan Johnson said: We’re working on the basis of having goal-line technology in place for the start of the season.

“All clubs will have to have the system, including those promoted.”

Hawk-Eye and GoalRef were used at the 2012 Club World Cup, but the Premier League has not released the names of the companies they are speaking with.

Speaking exclusively to iSportconnect, René Dünkler of GoalRef would not confirm whether they were in talks with the Premier League, but did say their system caused “no delay. Only one second and the information goes directly to the referee.”

FIFA have also today announced that GoalControl has been added to the list of companies bidding to install their systems at the World Cup which includes; Hawk-Eye, GoalRef and Cairos.

GoalControl GmbH, based in Wurselen, Germany uses 14 high-speed cameras located around the pitch which are directed at both goals.

A FIFA statement said: “The position of the ball is continually and automatically captured in three dimensions – using X, Y and Z co-ordinates – as soon as it approaches the goal-line. When the ball has completely crossed the line, the central analysis unit sends an encrypted signal to the referee’s watch in less than a second. GoalControl-4D can be used with both standard goalposts and balls.

GoalControl GmbH and FIFA signed the licensing contract after successful tests at Dusseldorf’s Esprit-Arena and the Veltins-Arena in Gelsenkirchen in February 2013.

GoalControl will also participate in the tender to provide goal-line technology at the FIFA Confederations Cup 2013, as well as the 2014 FIFA World Cup Brazil.