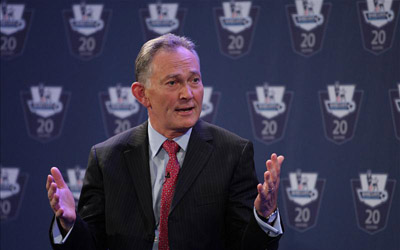 The Premier League have signed a partnership with the Indian Super League (ISL) organisers to help nurture and develop the Indian league before its inaugural edition of the competition which is set to kick-off in September.

The Indian Super League is a joint venture between IMG-Reliance and the All India Football Federation in conjunction with Star India who hold Premier League broadcasting rights in India.

The agreement with the ISL is expected to lead to exchange programmes between clubs in England and in India and could pave the way for Premier League clubs to play friendlies in the sub-continent.

Premier League chief executive Richard Scudamore said: “Having earlier this year signed a mutual co-operation agreement with the Asian Football Confederation, we are very pleased to also enter into this partnership with ISL.

“This will see both organisations work together and share knowledge in several key areas including player development, refereeing, marketing and promotion.

“We know from our broadcast partner Star India, and our work with AIFF on our long-established grassroots football project Premier Skills that we run in several locations across India, that the popularity of football, and Premier League, is growing.”

AIFF President Praful Patel said: “The AIFF is extremely pleased to be a part of the strategic partnership between the Premier League and the Indian Super League.

“This is an outstanding opportunity for the Indian Super League to build from the very best in the business when it comes to running a highly successful league.

“The Premier League is revered around the world, and by learning from the practitioners who have made it so successful, the Indian Super League will develop and grow in the right way, ensuring benefits not only for the league itself but also for the wider Indian football ecosystem in the longer term.”