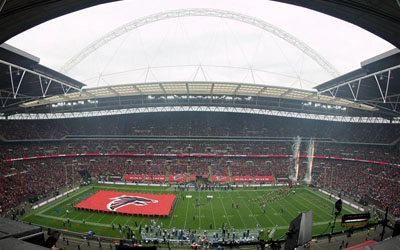 A potential National Football League (NFL) franchise may generate more than £100 million a year for the UK, according to a Deloitte report.

The study by the accountancy firm, commissioned by the NFL and a London marketing agency, also casts doubt on the feasibility of a Super Bowl in the British capital and warns of a negative reaction from the United States.

The prospect of a team being permanently based in London has been growing since the NFL first brought regular-season games to the city in 2007. With three games at Wembley Stadium this season and three games set to be played next year.

Including spending outside of the capital linked directly or indirectly to a franchise, Deloitte says a London team’s total potential gross output in Britain is estimated to be 158 million pounds ($255 million) per season. Deloitte is assuming players and staff would play two games on four visits each season, rather than being based in London.

The report will be discussed at the next owners’ meeting in 2015, said Mark Waller, the NFL’s executive vice president of international who is hoping the obstacles to a London franchise can be overcome.

“There is no value to anybody putting a team here and finding the rigors of the season do not allow it to compete at the highest level,” Waller said. “So that’s the work we are going to do. That’s probably a five-year piece of work.”

The Wembley contract runs until 2016, but the NFL has not talked to West Ham about potentially using the revamped Olympic Stadium in east London.

“When we looked at that venue before West Ham took it on it wasn’t clear to us how it was going to end up as a venue,” Waller said.

Sajid Javid, the British cabinet minister with responsibility for sports, said the appetite for the NFL is growing and the report shows the “cynics are wrong.”

“The NFL has a huge fan base here,” the culture secretary said. “I hope it will become a second home for American football.”