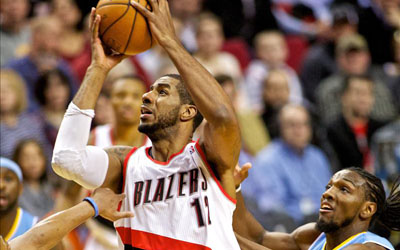 The high flying Portland Trail Blazers have extended their partnership with Wells Fargo, which runs through the end of the 2015-16 NBA season.

The deal means the two organisations will continue to jointly market their brands throughout the region and also team up to support local community initiatives, including a new college scholarship program.

Wells Fargo became a Blazers sponsor in 2005. This marks the third renewal for the company.

The agreement gives Wells Fargo prime visibility at the Moda Center, during the team’s statewide radio and television broadcasts and in other Trail Blazers communications and events.

The two organizations will also continue the annual Wells Fargo Fan Fest, where fans are given free tickets to watch a preseason scrimmage. The event draws about 6,000 to 8,000 fans each year.

Wells Fargo will continue to sponsor the SMART Play of the Game where Wells Fargo will donate $250 the Start Making a Reader Today at every home game. In the past eight years, combined donations from the Trail Blazers and Wells Fargo to SMART have totaled $120,000.