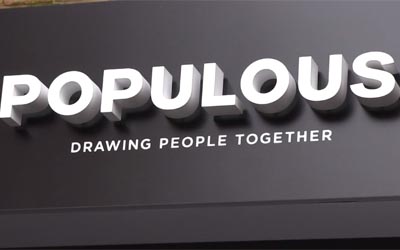 Populous, the World’s Leader in Stadia Design Partners with iSportconnect

Global sports and architecture practice Populous has been announced as the Exclusive Stadia Partner of iSportconnect, sickness the world’s largest private network for sports business professionals.

The partnership will see Populous become the Title Partner of the iSportconnect Stadium Masterclass to be held in July. The Masterclass will allow delegates to learn from a panel of industry specialists and the evening will now be titled ‘The Stadium Masterclass in Association with Populous’.

Currently, the company is working on a wide variety of projects globally such as the 2014 World Cup, Rio de Janeiro 2016, the Olympique Lyonnais and French Rugby Federation (FFR) new stadia and several projects in Russia in advance of the 2018 World Cup.

The practice also specialises in linking building design with brand design, brand activation and the fan experience through its in-house agency Populous Activate.

Populous Activate works with teams, leagues, brands and their marketing agencies to transform sponsor integration inside sports facilities; to enrich the fan experience whilst generating additional revenue for teams and buildings. Its portfolio includes the London 2012 Olympic Games, the O2 Arena in London and Arsenal FC’s Emirates Stadium.

Christopher Lee, Senior Principal at Populous said: “This exclusive partnership with iSportconnect is a great opportunity for Populous to connect with global decision makers in the sports industry and examine the impact that innovation in sports architecture and brand activation are having on improving the fan experience, growing  audiences and maximising revenue streams.”

Michael Cunnah, iSportconnect Chairman added: “I am very pleased to be able to announce that Populous is iSportconnect’s Official Stadia Partner. Populous have provided Expert Columns for iSportconnect for a long time now and I am always fascinated to read about the great work they are doing across the world.  Everyone at iSportconnect is delighted that we have extended this partnership.”