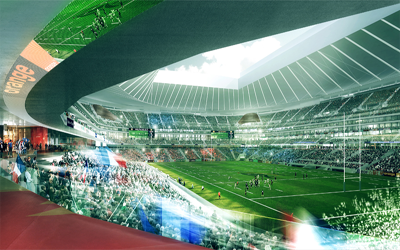 The new stadium will have a capacity of 82, cough 000 and host all French home matches as well as conventions and a wide range of sporting events. It will feature a retractable roof – making it Europe’s largest roofed entertainment venue – ensuring matches can be played in any weather.

The design is inspired by a fortified town and the white stone used echoes the quarries in Baux de Provence.

The new stadium is expected to host 17 to 20 events per year.

Pierre Camou, President of the FFR, said: “Today, we have taken a fundamental step which embodies a strong ambition and a vital project for the FFR, allowing it to be autonomous and master of its future. Now we know what this ‘garden of french rugby’ will look like a modern, innovative and multifunctional venue which can take part fully in the national and international sports landscape.”

Ben Vickery, Senior Principal of Populous, added: “We are delighted to have been appointed by the FFR to work on this very prestigious project. The Grand Stade of the Fédération Française de Rugby will be not only the new home of French Rugby, but a cultural catalyst for the district of Essone as well as France.”