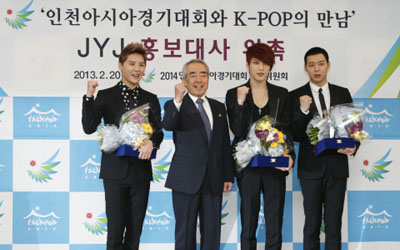 The Committee said that they have picked JYJ, a popular K-pop trio gaining massive popularity in Asia, as their publicity ambassador to step up their efforts to increase people’s awareness of the event and for its publicity in the Asian region.

“JYJ’s appointment as publicity ambassador means a lot to us because it is the first step to promote the event overseas,” said Kim Young Soo, the president of the organizing committee. “We hope that the Incheon Asian Games will successfully be known to the 4.5 billion Asians in the world with JYJ gaining Asian-wide popularity as the ambassadors of the 2014 Asian Games.”

JYJ will participate in making songs, dances, and music videos for Incheon Asian Games and they will also join the Road Show, which will be held in October and November in Hanoi, Vietnam and Guangzhou, China to wish the success in Incheon Asian Games.