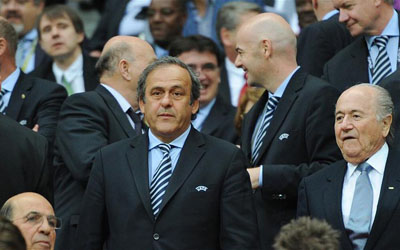 FIFA President Sepp Blatter has lost the support of Michel Platini, the UEFA president has revealed.

Blatter, at a FIFA Congress in Sao Paulo on Wednesday, suggested he was ready for a new term despite having said in 2011 he would not seek re-election for an unprecedented fifth term.

A number of leading football officials have already voiced their opposition to Blatter being given a fifth term this week, including FA chairman Greg Dyke, FA vice-chairman David Gill and Dutch FA chief Michael van Praag.

Now Platini, who has yet to decide if hew owuld contest the FIFA presidential election, believes it’s time for a change.

“I am supporting him no longer, it’s finished,” said Frenchman Platini.

“He knows it, I told him. I think FIFA needs a new breath of fresh air.”