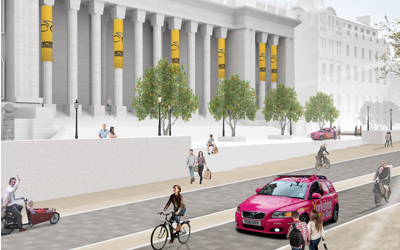 An iconic street in Leeds could undergo a major re-modelling project to accommodate cyclists as a part of the legacy of the Tour de France.

The Tour de France starts on the Headrow in Leeds this year and the City Council is now calling on national government to commit money to ensure a legacy is achieved.

Leeds City Council are calling for £10 per head per year from existing transport funds to every local authority in Britain to re-model the street, apoplectic whilst Olympic champion Chris Boardman has launched a £4m vision to make the street more cycle friendly.

Commenting on the plans, British Cycling’s Policy Adviser, Chris Boardman, said: “This would be a true legacy from Britain hosting the Tour de France. Inspiring people to get on bikes is one thing but the fact is that cycling has been designed out of our towns and cities and we urgently need to put this right.

“Millions of people in Britain say they would like to cycle but they are put off due to safety fears. We cannot pretend that this is going to miraculously change.

“National government need to face up to some hard truths and commit adequate investment. It’s important to clarify, we are not asking for more money but for a tiny fraction of the existing provision to be targeted as part of a long term plan to remodel our urban landscapes.”

Developing closer ties with British Cycling is one of the elements outlined in Leeds City Council’s own Tour legacy.

Leader of Leeds City Council, Councillor Keith Wakefield, said: “We are firmly committed to maximising every possible benefit from the city hosting the Tour de France.

“As we outlined in our legacy vision, we want to put cycling at the heart of the future of Leeds, building on our existing relationships with fantastic partners like British Cycling to bring about significant benefits in a range of areas such as health and wellbeing, transport, leisure, the environment and the economy.

“That is our long-term aim to do everything we can to encourage and help as many people as possible to get cycling.”