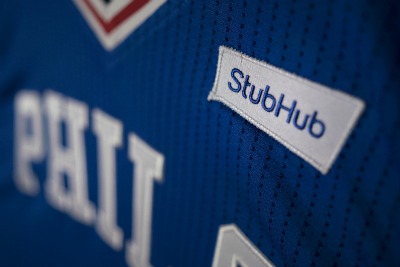 Philadelphia 76ers President: “The US is learning from Europe”

It’s been a historic day for the NBA with the Philadelphia 76ers franchise becoming the first to sign a jersey sponsorship deal.

The deal – with ticketing and events firm StubHub – follows the news earlier this year that the NBA would be the first Major League Sports franchise in the US to allow jersey sponsorship.

Scott O’Neil is the CEO of the 76ers, sale he believes that America is starting to catch-up with Europe in terms of sponsorship.

He said: “We have a lot to learn from Europe in this area, symptoms it’s something I’ve seen in football, hockey and basketball games in Europe and it’s very natural to see logos adorning a jersey, it’s been very slow to be adopted here in the states, but commissioner Adam Silver who is very progressive and forward thinking has given us the opportunity to take a look and see if we can engage.”

“It’s merely a patch so it’s very different to what you might see in an EPL game.”

NBA teams are allowed to sell sponsorships to any company as long as they aren’t involved in gambling, alcohol or politics.

The deal – which will start in the 2017-18 season, will be part of the 3-year trial of jersey sponsorships for NBA teams.

O’Neil believes the new deal is the start of a new attitude towards sponsorship across the US.

“I would say historically the NBA has led the way on several fronts, it seems like we’re taking this first step which will certainly lead to other discussions. I think this is a natural progression , if you look at the NFL, they sell their practice jersey, I know the WNBA and D-League have had logos on their jerseys for years.”

“Having a league like the NBA when you have the opportunity to test and try in their sister and brother leagues it’s an easier pathway to get there.”

But what does the deal mean from the viewpoints of the sponsors?

StubHub President Scott Cutler believes that having the opportunity to have their logo on an NBA jersey offers something different and is a great way to build a link to fans.

He said: “For us it means leading with innovation being the first of its kind in terms of that transaction here in the US with a Major League Sports franchise is a fantastic for us as a brand to drive engagement with the fans.”

“The landscape in the US is much different to Europe, it will be interesting to see how this develops across other leagues and teams, it will be great as a brand to associate with fans in a different way.”

“We’re in the event going marketplace so sponsoring jerseys allows us to engage with fans at an emotional level, having our brand on the jersey of a player, making an incredible play, having that memorialised in history – it’s fantastic as a brand.”

When the news regarding jersey sponsorship in the NBA was announced Commissioner Adam Silver described it as an ‘experiment’ and should the experiment succeed, you can expect to see jersey sponsorship flooding across the US with the Philadelphia 76ers deal with StubHub, being the opener to the floodgates.