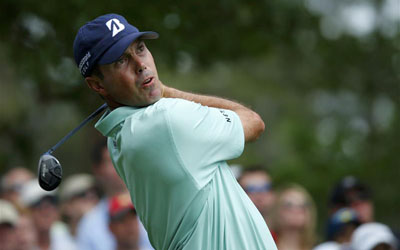 PGA Tour golfer Matt Kuchar, healing currently ranked 5th in the world, will become the the first brand ambassador and face of the Skechers GOgolf line, part of the Skechers Performance Division.

“We are excited to announce the addition of Matt Kuchar to the Skechers Performance Division as we expand the Skechers GOgolf line,” said Robert Greenberg, SKECHERS Chief Executive Officer. “Aligning with Matt is key to our overall growth strategy for the Performance Division and we know he will play an integral role in building brand awareness with both consumers as well as the discerning golf community.”

As one of the most respected golfers in the sport, Kuchar’s accomplishments are noteworthy. After bursting on to the golf scene with his trademark smile at the 1998 Masters as the reigning U.S. Amateur champion, he has claimed seven titles on the PGA Tour and is a perennial fixture atop tournament leaderboards. His 2013 season was a banner year, as he earned two PGA Tour titles and helped the U.S. squad win the Presidents Cup.

“Whether competing or practicing, I’m on my feet for hours, so the comfort and performance of my shoes is a critical factor in my success,” Kuchar said. “In trying out the GOgolf line, I was really pleased both with the shoe and with the Skechers Performance Division team. Their attention to detail and expertise in performance footwear is impressive.”

“Matt brings a great deal of knowledge to our product development,” added Rick Higgins, VP of Merchandising/Marketing, Skechers Performance Division. “He offers all the qualities we look for in a brand ambassador so we’re thrilled to partner with him on our Skechers GOgolf line. We work closely with our elite athletes to build innovative footwear and Matt’s insight will help infuse our existing award-winning technologies into our golf offering.”

This announcement marks the third elite, high-profile professional athlete to join the Skechers Performance Division. On board since 2011, champion marathoner and Olympic medalist Meb Keflezighi recently extended his agreement by three years through 2016 and elite distance runner Kara Goucher signed on in May.