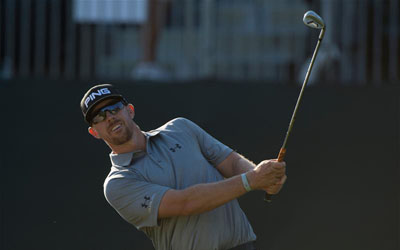 In 2014, Mahan continued his winning ways, capturing his sixth PGA Tour victory at The Barclays and making history as the only player to advance to the Tour Championship every year since the inception of the FedExCup Playoffs in 2007. He had six top 10s, including at the PGA Championship, on his way to earning more than $3 million. He recently competed on his third U.S. Ryder Cup team.

“Hunter impresses us year in and year out with his consistency, and that’s a testament to how hard he works to maintain his status as one of the game’s best,” Solheim said. “He combines talent with a great work ethic and a very likeable personality that connects with fans. Hunter has been a loyal PING player since college and we’re proud to continue our affiliation with him.”

As part of the agreement, Mahan will wear a PING hat, carry a PING staff bag and play PING equipment. Financial terms and the length of the agreement were not disclosed.

He is currently playing a G30 driver, i25 hybrid, S55 irons, prototype PING wedges, and a Scottsdale TR Anser 2 putter. He is 21st in the most recent Official World Golf Ranking.

“Starting a new season this week, it’s amazing to think that PING and I go back to my days at Oklahoma State,” Mahan said. “All along, it’s been the performance of their products that has given me the consistency that’s necessary to succeed at every level. Out on tour I have complete confidence in my equipment but also in the PING team, which does a great job making sure I’m dialled in and comfortable with my clubs. I’m thrilled to continue my relationship with a company that is an industry leader.”