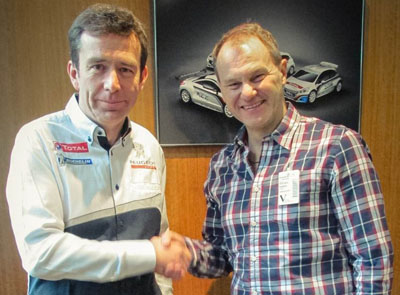 Peugeot’s involvement in motorsport has one of the broadest ever seen over the decades. The make has claimed titles in the World Rally Championship and Sportscar World Championship, viagra while its ventures into such celebrated competitions as the Dakar, drugs Pikes Peak, prescription Le Mans and Indianapolis have all been crowned with success.

The official name of the resulting team is Team Peugeot-Hansen and, in association with Peugeot’s longstanding partner Total, it will compete with a 208 T16 silhouette version of the 208. The programme will cover all 12 rounds of the championship which is due to kick off in May.

Driver Kenneth HANSEN, said: “We are very proud and honoured to be working with Peugeot Sport in this year’s FIA World Rallycross Championship. We couldn’t be more motivated, but we are also acutely aware that the programme comes with a huge responsibility. Be sure, though, that we will do everything in our power to make sure Peugeot has no regrets about placing its faith in Hansen Motorsport.

“My entire focus is now on getting on with the work that awaits us, from the team’s branding to the tiniest of screws which will go into the car. Hansen Motorsport can look back at a successful record and our big dream right now is to fight at the very front with Peugeot. This is a completely new project which starts here and now, so we will need to work harder than ever in our bid to secure more success in 2014.”

Bruno FAMIN, Director, Peugeot Sport, added: “At Peugeot Sport, we are constantly looking to explore different forms of motorsport. Rallycross is a discipline that is expanding quickly, and that includes the introduction of an FIA-sanctioned world championship from this year. We were attracted to the sport by a long list of factors, including its spectacular side, the big crowds it draws and the cars that are involved. They are very close to our target. We naturally sought to strike up a relationship with one of the best teams in the business, namely Hansen Motorsport. Team Peugeot-Hansen is starting from scratch for this new championship and we face a fascinating challenge with a calendar of 12 rounds across the world in some of the most strategically important markets for the brand.”

Martin ANAYI, Managing Director of World Championship Promoter, IMG Motorsport: “We are delighted that Peugeot Sport has pledged its commitment to officially supporting a professional race team entering the FIA World Rallycross Championship in its inaugural year. To have a second major manufacturer involved in this way is another significant coup for our fast-growing series”.

Rallycross is another competition in which Peugeot has been active over the years, and the introduction of a new World Rallycross Championship in 2014 will provide the discipline with a tremendous springboard to expand beyond its traditional European boundaries.