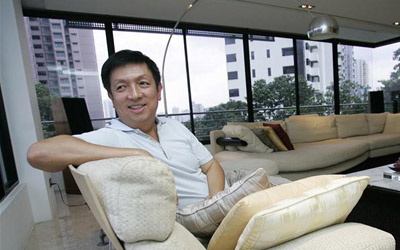 Singapore businessman Peter Lim, the majority owner of Valencia, has secured a 50 per cent stake in Salford City FC – the club owned by the five former Manchester United players known as the ‘Class of ’92’.

Papers have been submitted to the Football Association to formalise the acquisition of the shares.

Gary and Phil Neville, Ryan Giggs, Paul Scholes and Nicky Butt will each retain a 10 per cent stake in the Evo-Stik Division One North club.

Lim has long been linked with owning an English club and in 2010 withdrew a bid to buy Liverpool. He took over Valenica earlier this year.

A statement from the ‘Class of ’92’ said: “When we set upon this journey we always knew at some point we wanted external partners involved, people who would share our vision for Salford City FC.

“We have all known Peter for over 10 years, his love of sport, above all football, is well documented. He has an incredible track record in business as well as youth and community engagement, especially at grassroots level.

“This will be fantastic for SCFC, Peter’s experience and knowledge is invaluable and can help take SCFC to where we believe they can be, it’s exciting times for the club.”

A spokesperson for Lim added: “What the lads want to accomplish resonated strongly with Peter who shares a common belief with the lads in youth development through sports.

“The management of the club on a day-to-day basis, as announced back in March, will remain the same, this arrangement is important to all concerned.”