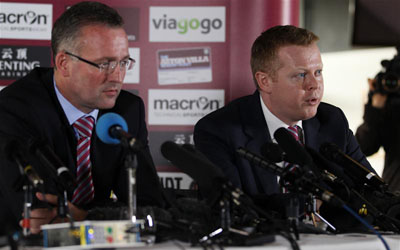 Faulkner, who has been replaced by Robin Russell as acting CEO, leaves after failing to reach an agreement on his future as the club claimed, via a statement, he had hoped to ‘re-engage with Lerner’s broader business while remaining involved with Villa in a non-operational role’.

“I would like to thank Randy for the opportunity to become involved with Aston Villa and for the relationship we built over the years, which pre-dated my time at the club,” said Faulkner.

“To the Villa fans, I am grateful for their support over the years, and for their passionate love for, and loyalty to, this great club which deserves the very best.

“I would like to make particular reference to the wonderful Villa staff both at Bodymoor Heath and Villa Park.

“They are an incredible group of people and it’s been a privilege to lead and work with them on a daily basis.

“Villa is best in class in so many ways off the field, and I only hope that success on the pitch follows.

“I feel very humbled to have been able to spend such a long period of time amongst such special people at such a special club and I wish them, Paul Lambert and the squad all the very best for the future as I look to embark on the next stage of my career and a new challenge.”

In response, Lerner said: “Paul has been fantastic in his role at Villa and more broadly as a colleague over the years. I offer him my deepest thanks.”