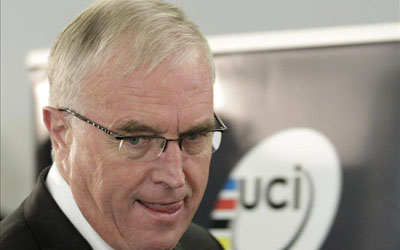 Pat McQuaid Looks to End ‘war of words’ with WADA

This follows on from the UCI’s announcement that they would resort to a Truth and Reconciliation Commission (TRC) after the collapse of the Independent Commission that was set up to investigate the UCI’s role in the Lance Armstrong doping scandal.

A statement released by WADA said the UCI was “determined to apparently deflect responsibility for the doping problem in its sport to others.” The statement also said that WADA was “dismayed by the press release issued by UCI, both in terms of its content and deceit,” and that the UCI “has again chosen to ignore its responsibility to the sport of cycling.”

This led the UCI to respond by revealing an email exchange between McQuaid and WADA President John Farey.

McQuaid said in a statement: “I am very saddened that it has come to this, but I cannot allow the latest blatant and aggressive misrepresentations contained in WADA’s most recent press release to go unchallenged.

“Mr Fahey is saying one thing in public and quite the opposite in correspondence with me, as the attached communications show.”

Now McQuaid has turned his attention to IOC members, in the hope of gathering support from influential heads of international sport federations.

“The UCI is committed to establishing a Truth and Reconciliation Commission to examine the culture of doping in cycling in the past, as well as the allegations contained in the USADA reasoned decision on Lance Armstrong and the United States Postal Service (USPS) team, and to clean the air so that our sport can move forward,” McQuaid’s letter to IOC members read.

“In order to do this, I very much hope that WADA will now desist from continuing the current undignified war of words via the media and sit down with us in a spirit of cooperation and partnership to work out the details of the Truth and Reconciliation process. In return, the UCI will gladly do the same.

“We would welcome any support you can offer in underlining to WADA the importance of working in partnership and cooperation with the UCI to establish this Truth and Reconciliation Commission.”