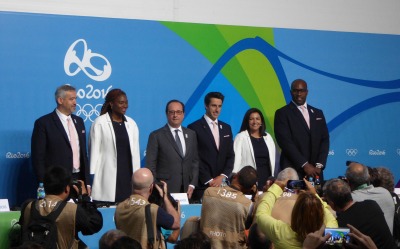 By Christian Radnedge in Rio

Paris’ bid to host the 2024 Games will stick closely to their projected budget of 3 billion Euros, co-chairman Tony Estanguet told ISportconnect in Rio on Friday.

After a joint press conference in the Barra Olympic Park alongside France president Francois Hollande and Paris mayor Anne Hidalgo, Estanguet spoke about learning lessons from previous bid budgets that have inflated when it comes to Games time.

For example the London 2012 budget at the time of the bidding phase was around £2bn – but that rose to more than £9bn once the Games started four years ago.

But Paris, bidding to host its third Games, would not stray far from its promised figure Estanguet said.

“It’s true, you’re right in saying that every time it’s the same story with the bids and their budget increases,” he said. “On our side, what is very strong is that we have 95 per cent of existing venues. We have public transport, we have all the hotels because we have 140,000 rooms in hotels so we have a big margin in terms of hotels.

“So I don’t see how we could go from 3bn to four or five because we have only the Olympic village to be built and the aquatics centres and except those two we have everything. So we took 3bn for those two and we took a margin because we know there might be challenges. But also we want to be transparent, we want to change the way of bidding like president Hollande said earlier, it’s not just our fourth bid it’s a different bid.

“We tried to start from scratch to have a new strategy. In our budget also we took people from outside to evaluate really deeply the cost. So I feel we are quite strong on our figure.”

Questions from reporters to president Hollande focused on security and safety in light of the recent spate of terror attacks that have occurred in France, and the shootings that happened in Paris itself last year.

Asked whether he could assure the international community that France would be a safe host for the Games, Hollande said: “Every candidate city faces the question of terrorism. No country is immune.

“Indeed the threat is there, but our country is ready to face up to it. And who knows what the world will look like in 2024?”

The president also listed the amount of sporting events France has hosted this year, all without incidents. “We hosted a very successful Euro 2016,” he said. “During the Euro Cup we had not one single [terrorist] incident.”

The race to be chosen as host for the 2024 Games by the International Olympic Committee in Lima next year is a hotly contested one with Budspest, Los Angeles and Rome also bidding.

The fact though that Hollande took time out from a tense time in Europe to fly the flag for Paris 2024 in Rio shows the level of commitment he personally invests in the bid.

Estanguet assured ISportconnect that the vast majority of the public of France and Paris were behind the bid as well, saying that levels of support had not dropped beneath the “70 per cent” level that was present when Paris launched its bid in 2015.

“It’s quite surprising for us that we have the same level of support since we began the bid and it’s higher than in previous bids,” Estanguet said. “Right now it is around 70 per cent and for us it’s a very good figure. Even after the attacks we maintained this level.

“It will be interesting to have a poll after the Games in Rio to see how they have had an impact on people in France. Maybe they will make a link between our bid and what they watched at Rio 2016.”

It appears that French businesses are on board too as airport authority manager Groupe ADP signed on as the latest Paris 2024 sponsor last week. It follows the announcement in June that Air France had joined as an official supplier with 10,000 planes set to fly around the world bearing the Paris 2024 logo.

Estanguet said that businesses in Francs were “very excited” about the international opportunities that could be afforded them if Paris was chosen as the host of the Games.

The winning city will be chosen at the IOC session in Lima, Peru in September of next year.